I have always been in favour of ecumenical cooperation and finding areas of commonality and perhaps even unity amongst Christian Churches. In fact, despite our perceived differences most of what we believe is the same.

One of the issues, for example, that drew the Anglican Church and the Roman Church apart regarded the difference between consubstantiation and transubstantiation. Don’t make me explain that now, and smarter people than me believe that there is no real difference. But it is one of the issues that separated us. Today, the issues might have more to do with power and authority as it is expressed in the leadership of the two churches.

When the Anglican Church of Canada was negotiating full communion with the Lutheran Church in Canada we were also in negotiations with the Roman Catholic Church. The principle upheld at the time was consistency—that what we said to one church we said to the other.

Another thing to be added into the mix is that many of the “issues” that separate the churches are of little or no significance to the wider community. Simply put, most people don’t care. So, as we negotiate, talk and perhaps even bicker we must also keep a balanced outlook, realizing that bickering never brought anyone to Christ.

It’s a challenging row to plough, being true to what we believe while wanting to be on good terms with other churches; and maintaining a balance between what we’ve done and what really matters to people.

Every day is an opportunity to begin a new direction on our faith journey—they say, don’t throw the baby out with the bathwater, but we do throw out the bathwater. For me, holding on to the belief that God forgives is key. No matter who we are, or what we’ve done—no matter how far we think our journey takes us from God—there is forgiveness. A new opportunity to journey in faith with our loving Creator.

Other Churches, other faith group, and people without faith can help us deepen our commitment to Jesus Christ and be the people we are called to be.
Posted by John Clarke at 1:45 PM

St. Paul's Church, a transforming community of love and justice. 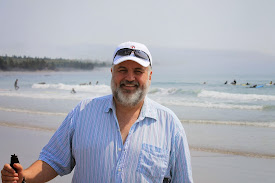 John Clarke
I am the Rector of St. Paul's Church, an Anglican Church in Charlottetown, Prince Edward Island, CANADA. I was appointed rector of St. Paul's on July 1, 2004. Prior to this appointment I served the parishes of Bridgewater and the Conqueralls on Nova Scotia's South Shore and Port Hawkesbury with Arichat on Cape Breton Island. I write a message in our weekly bulletin and I will post those articles here. Maybe, from time to time, other thoughts and things of interest will be posted (like sermons in progress).